Facing an employee-backed or employee-led shareholder proposal generates media attention and causes embarrassment for senior management. But are these recent examples a flash in the pan, or should more companies be bracing for employee-shareholder activism?

A confluence of circumstances

Pat Tomaino is director of socially responsible investing at Zevin Asset Management and has filed shareholder proposals at Alphabet and Amazon, as well as other large technology companies, in recent years. He worked with an employee group at Alphabet, following a mass employee walkout at Google in 2018.

‘It’s a strategy that we as impact investors want to leverage more in the future, but it really depends on a confluence of circumstances,’ he says. ‘We’re not in the business of instigating employee activity inside companies – that’s not the role of investors. We have a stake in the financial outlook of the company. We’re not creating employee activism but, where we do see that it exists, we take that into account. What are employees asking for and why are they acting that way? What signal should we take for how companies are handling their long-term ESG goals?’

Tomaino says that when he has talked to employee groups at large technology companies about shareholder proposals, there’s a feeling that they have tried other avenues of feedback and activism internally. ‘These employees had tried the usual channels and were looking for levers to make change,’ he says. ‘They’d done direct action, they’d talked to the press and they’d noticed that there’s power through shareholder proposals.’

In Germany, employee-shareholder activism is much more established. Labor groups have experimented with shareholder proposals since the early 1990s, according to an academic report from Natascha van der Zwan, assistant professor of public administration at Leiden University. One particularly notable example she highlights is the Deutsche Telecom annual meeting in 2007, when around 1,000 employees entered the meeting to voice discontent about increased working hours and pay cuts as part of a corporate restructuring. Employee-shareholders reportedly signed their voting rights over to local labor unions to oppose the restructuring, as part of a broader campaign involving employee walkouts and labor union protests.

For board directors in the US, Gillian Emmett Moldowan, partner at Shearman & Sterling, says it’s never been more important to receive meaningful updates about nonexecutive employees.

‘Employee campaigns of any nature get significant press attention,’ she explains. ‘Boards have historically been more separated from non-executive employee issues, whether it’s compensation or workers’ issues, or how employees feel about the firm as a whole. I would encourage boards to get an understanding from those who report into the board of human capital management risk and enterprise risks, as well as an understanding of what the company is doing to assess and mitigate those risks.

‘If boards have not historically received information about employee satisfaction and employee sentiment about the company management, then getting hold of that information is a good first step.’

Instances of recent employee shareholder activism have defining traits that may not be replicated elsewhere. For instance, Tomaino explains that many Alphabet employees involved in the shareholder action feel aggrieved at how they think the company’s mission has changed. Google’s motto in its IPO documents was ‘Don’t be evil’, but it has since dropped the slogan and employees have expressed concerns about the direction the company is moving, including in its bidding for national defense contracts.

‘Part of the issue is the power some companies have given to their employees through equity,’ he explains. ‘In addition, many of these companies are recruiting from the same talent pool, where there’s a desire to work for a company that has some sort of positive purpose. There is significantly more desire [on the part of] millennials and Gen Z to be part of an organization that has purpose, and you’re going to have to compete for that top talent by giving them equity.’

Tomaino says employees with large amounts of their personal net worth tied up in company stock will view themselves as engaged investors as much as employees. But Moldowan says this shouldn’t make companies think differently about granting stock options to employees as part of their compensation packages.

‘Shareholders can bring a proposal if they qualify to do so under the proxy rules, and those shares can be bought on the market – they need not come from an equity compensation plan,’ she says. ‘Not giving equity awards won’t stop an employee acquiring equity by other means.’

An Amazon employee group recently filed a comment letter with the SEC expressing concerns and opposition to proposed changes to Rule 14a-8, on the grounds that planned shifts to share ownership and proposal resubmission thresholds would make it harder for employee groups to advocate for change.

All of the interviewees for this article agree that it’s important for boards to receive information about employee sentiment and for boards or management to be seen to respond appropriately when employee groups express significant levels of discontent. Tomaino acknowledges that it’s unlikely large passive investors would vote in favor of employees and against management – unless the proposal was on something truly egregious – but that a proposal can help cause embarrassment for management that may drive change.

As Covid-19 shines a greater light on the treatment and recognition of employees, and the Business Roundtable’s statement equally prompts stakeholders to question companies when they feel they’re not being given a fair hearing, this may not be the last we see of employee participation in shareholder proposals in the US. 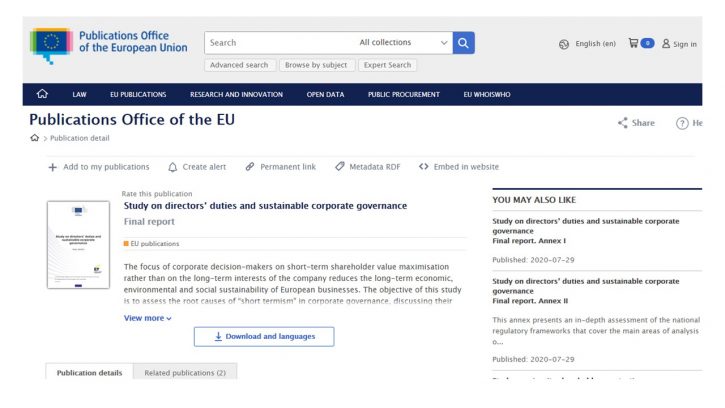 When they arise, claims relating to a company’s ESG disclosure are generally brought under Section 11 of the Securities Act of 1933, which covers material misstatements and omissions in securities offering documents, and under Section 10(b) of the Securities Exchange Act of 1934 and rule 10b-5, the principal anti-fraud provisions. To date, claims brought under these two provisions have been largely unsuccessful. Cases that have survived the motion to dismiss include statements relating to cybersecurity (which many commentators view as falling under the “S” or “G” of ESG), an oil company’s safety measures, mine safety and internal financial integrity controls found in the company’s sustainability report, website, SEC filings and/or investor presentations.

Interestingly, courts have also found in favor of plaintiffs alleging rule 10b-5 violations for statements made in a company’s code of conduct. Complaints, many of which have been brought in the United States District Court for the Southern District of New York, have included allegations that a company’s code of conduct falsely represented company standards or that public comments made by the company about the code misleadingly publicized the quality of ethical controls. In some circumstances, courts found that statements about or within such codes were more than merely aspirational and did not constitute inactionable puffery, including when viewed in context rather than in isolation. In late March 2020, for example, a company settled a securities class action for $240 million alleging that statements in its code of conduct and code of ethics were false or misleading. The facts of this case were unusual, but it is likely that securities plaintiffs will seek to leverage rulings from the court in that class action to pursue other cases involving code of conducts or ethics. It remains to be seen whether any of these code of conduct case holdings may in the future be extended to apply to cases alleging 10b-5 violations for statements made in a company’s ESG reports.

Claims under U.S. state consumer protection laws have been of limited success. Nevertheless, many cases have been appealed which has resulted in additional litigation costs in circumstances where these costs were already significant even when not appealed. Recent claims that were appealed, even if ultimately failed, and which survived the motion to dismiss stage, include claims brought under California’s consumer protection laws alleging that human right commitments on a company website imposed on such company a duty to disclose on its labels that it or its supply chain could be employing child and/or forced labor. Cases have also been dismissed for lack of causal connection between alleged violation and economic injury including a claim under California, Florida and Texas consumer protection statutes alleging that the operator of several theme parks failed to disclose material facts about its treatment of orcas. The case was appealed to the U.S. Court of Appeals for the Ninth Circuit, but was dismissed for failure to show a causal connection between the alleged violation and the plaintiffs’ economic injury.

Overall, successful litigation relating to ESG disclosures is still very much a rare occurrence. However, this does not mean that companies are therefore insulated from litigation risk. Although perhaps not ultimately successful, merely having a claim initiated against a company can have serious reputational damage and may cause a company to incur significant litigation and public relations costs. The next section outlines three key takeaways and related best practices aimed to reduce such risks.

Although the above makes clear that ESG litigation to date is often unsuccessful, companies should still be wary of the significant impacts of such litigation. The following outlines some key takeaways and best practices for companies seeking to continue ESG disclosure while simultaneously limiting litigation risk.

From our limited survey of companies across four industries that receive significant pressure to publish such reports—Banking, Chemicals, Oil & Gas and Utilities & Power—the following preliminary conclusions were drawn:

Key Takeaway 2: ESG Reporting Can Pose Risks to a Company

Best Practices: Companies should ensure statements in ESG reports are supported by fact or data and should limit overly aspirational statements. Representations made in ESG Reports may become actionable, so companies should disclose only what is accurate and relevant to the company.

Striking the right balance may be difficult; many companies will under-disclose, while others may over-disclose. Companies should therefore only disclose what is accurate and relevant to the company. The US Chamber of Commerce, in their ESG Reporting Best Practices, suggests things in a similar vein: do not include ESG metrics into SEC filings; only disclose what is useful to the intended audience and ensure that ESG reports are subject to a “rigorous internal review process to ensure accuracy and completeness.”

Key Takeaway 3: ESG Reporting Can Also be Beneficial for Companies

The threat of potential litigation should not dissuade companies from disclosing sustainability frameworks and metrics. Not only are companies facing investor pressure to disclose ESG metrics, but such disclosure may also incentivize companies to improve internal risk management policies, internal and external decisional-making capabilities and may increase legal and protection when there is a duty to disclose. Moreover, as ESG investing becomes increasingly popular, it is important for companies to be aware that robust ESG reporting, which in turn may lead to stronger ESG ratings, can be useful in attracting potential investors.

Best Practices: Companies should try to understand key ESG rating and reporting methodologies and how they match their company profile.

The growing interest in ESG metrics has meant that the number of ESG raters has grown exponentially, making it difficult for many companies to understand how each “rater” calculates a company’s ESG score. Resources such as the Better Alignment Project run by the Corporate Reporting Dialogue, strive to better align corporate reporting requirements and can give companies an idea of how frameworks such as CDP, CDSB, GRI and SASB overlap. By understanding the current ESG market raters and methodologies, companies will be able to better align their ESG disclosures with them. The U.S. Chamber of Commerce report noted above also suggests that companies should “engage with their peers and investors to shape ESG disclosure frameworks and standards that are fit for their purpose.”